In order to relieve the bank’s balance sheet of distressed loans, Hamburg Commercial Bank AG (formerly HSH Nordbank AG) economically transferred to portfoliomanagement a portfolio of non-performing shipping loans with effect from 1 July 2016. The original exposure at default (EaD) as at the reporting date of 31 December 2015 amounted to about five billion euros. After restructuring measures and adjustments to the portfolio, an EaD of about 4.1 billion euros was transferred. The purchase price amounted to about 2.4 billion euros, which was the value established by the European Commission as the maximum permissible purchase price under the state-aid scheme.

Composition of the Initial Portfolio

The portfolio transferred (“Initial Portfolio”) consisted of 590 loan agreements with 193 borrowers. The funds had been used to finance 256 ships (as at the reference date of 31 December 2015) which serve as collateral. At the time of the transfer, 253 ships were transferred as collateral to portfoliomanagement. The three other ships were excluded from the portfolio due to sale or reclassification. About two thirds of the ships involved are container vessels, tankers and bulkers and to a smaller extent other types of ships. Due to the continual reduction of the portfolio, the number of ships in the portfolio is gradually declining. The overview below shows a classification of the Initial Portfolio.

Overview of the shipping markets in 2021

The container market continued to be of greatest importance for portfoliomanagement in the 2021 financial year. At year-end 2020, this segment accounted for EUR 772 million in financed volume, or around 77.8% of the total loan portfolio of EUR 992 million. By contrast, the percentage shares of the tanker market (EUR 90 million or around 9.1%) and dry bulk market (EUR 81 million or around 8.2%) segments were of comparatively less significance.

OUR COURSE OF BUSINESS IN 2021

In the 2021 financial year, the business activities of portfoliomanagement were dominated by the management of the loan portfolio and its performance. A significant recovery in container shipping started from the third quarter of 2020 onwards and continued during the course of 2021, with record levels of freight and charter rates as well as second-hand prices. However, there was a very positive development in the dry bulk market as well. portfoliomanagement took advantage of these developments, particularly in the last three quarters of 2021, to significantly reduce both the volume of receivables and the number of ship collaterals.
On the basis of these good market levels in the fourth quarter of 2021, portfoliomanagement decided to offer the vast majority of the remaining loan portfolio in its portfolio (hereinafter referred to as the “Blue Water portfolio”) to investors as part of a tender process conducted in accordance with competitive, non-discriminatory and transparent principles. Since the fourth quarter of 2021, significant financial resources have been deployed to implement the sales process, which reached a very important milestone with the signing of the purchase agreement on 21 February 2022. Please refer to section 2.3.5 Events after the balance sheet date.
The business performance of portfoliomanagement continued to be strongly influenced by the effects of the coronavirus pandemic in the past financial year. In this context, staff monitored the effects of uncertainties in the market environment on the loan portfolios of portfoliomanagement. In particular, they analysed the effects of the coronavirus pandemic on the market values and charter rates of the ships and the respective loan loss allowances and provisions on an ongoing basis. While negative economic and sector related developments predominated in the previous year, necessitating high net additions to loan loss allowances and provisions, the improved conditions in 2021 led to very significant reversals of write-downs in the loan portfolio and very significant realizations of income on disposals of receivables.
In addition, the ability of borrowers to service their loans was strongly favoured in many cases as a result of significantly increased charter rates, with an extraordinarily positive impact on portfoliomanagement interest income. In 2021, portfoliomanagement reported a result before loan loss allowances and provisions and foreign currency translation of EUR 47.6 million (previous year: EUR 9.8 million). This was mainly due to an extraordinary increase in net interest income and net commission income to a combined total of EUR 61.4 million (previous year: EUR 26.7 million), which was offset by a sharp reduction in general administrative expenses to EUR 14.9 million (previous year: EUR 18.4 million). In the past year, the net risk provisioning result increased extraordinarily to EUR 533.5 million (previous year: EUR -243.6 million), due in particular to high reversals of write-downs and significant realised gains in connection with the repayment of receivables. Together with an almost balanced result from foreign currency translation of EUR 0.0 million (previous year: EUR -0.8 million) and income taxes of EUR 20.1 million incurred for the first time, this resulted in an extraordinarily high net profit of EUR 561.0 million (previous year: net loss of EUR 234.6 million). 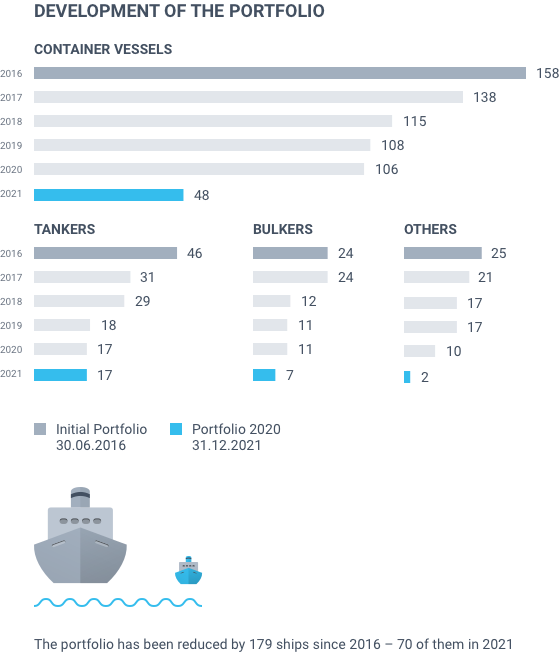 You will find the most frequently asked questions here.

WHAT IS AN “EXPOSURE AT DEFAULT”, EAD?

The Exposure at Default (EaD) denotes the amount of the existing loan receivables at the time a borrower defaults. A borrower is deemed to have defaulted if they have delayed the payment of interest and the repayment of capital for more than 90 days.

DO FLUCTUATIONS OF THE U.S.-DOLLAR EXCHANGE RATE AFFECT THE SUCCESS OF PORTFOLIOMANAGEMENT?

portfoliomanagement is not exposed to a direct currency risk, as the portfolio was acquired with a currency-matching refinancing, so that there are no open foreign exchange positions in the long term. A large portion of the ship loans administered are denominated in U.S. dollars and reported in euros. A rise in the value of the dollar will thus increase the reported outstanding receivables volume. By analogy, a fall in the value of the dollar will reduce the receivables volume.

Hamburg Commercial Bank (formerly HSH Nordbank AG) has so far not fully utilized the scope for portfolio transfer granted by the European commission. At a later time, a further sub-portfolio with a receivables volume of up to about 1.2 billion euros (in terms of the EAD as at 31 December 2015) could be acquired. The market value of this additional portfolio would then have to be determined separately, as the transfer values determined by the European Commission ceased to be relevant on 1 September 2016.

HOW WAS THE MARKET VALUE OF THE PORTFOLIO DETERMINED?

WHAT IS A FEEDER / FEEDER-MAX CONTAINER VESSEL?

Feeder and feeder-max are smaller vessels serving as feeder and distributor of containers and cars for large seagoing ships and seaports, where the routes are not navigable or are uneconomical for large ships.

WHAT IS A HANDY / HANDY-MAX CONTAINER VESSEL?

WHAT IS A PANAMAX / SUB-PANAMAX- CONTAINER VESSEL?

WHAT IS A BULK CARRIER / OPEN HATCH CARRIER?

WHAT IS A MPP / GENERAL CARGO VESSEL?

MPPs are multipurpose vessels that can be used both for the transport of various goods and as a working vessel. They often have their own loading gear. General cargo vessels carry various goods such as chemicals, food, machinery, clothes, etc.

WHAT IS THE AVERAGE AGE OF THE VESSELS?

The average age of the vessels in the Initial Portfolio was 9.3 years. Due to the reduction of the portfolio, the average age is subject to constant change.